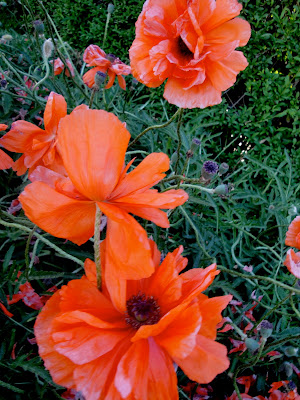 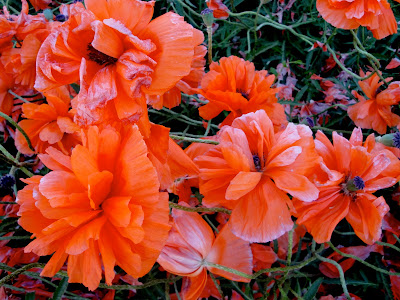 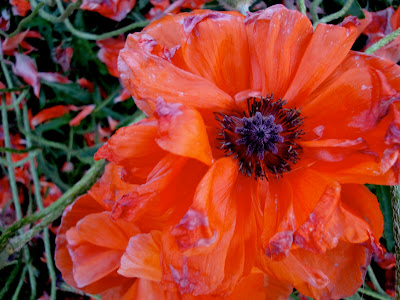 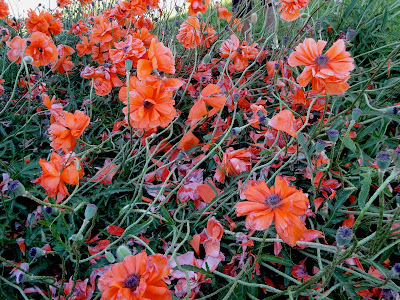 the neighbor up the street grows the most gorgeous poppies.
Posted by collette charles at 5:09 PM No comments:

the blue and green 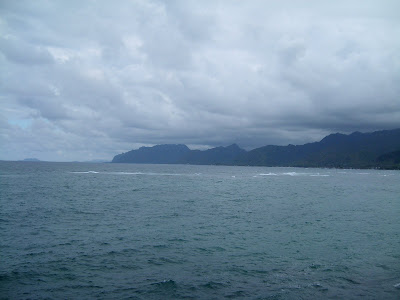 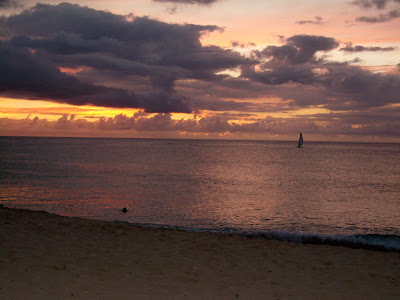 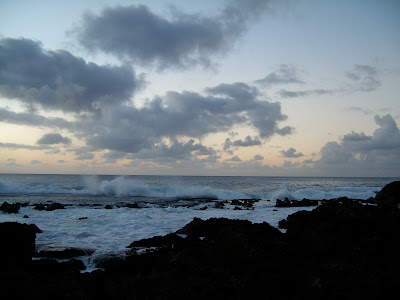 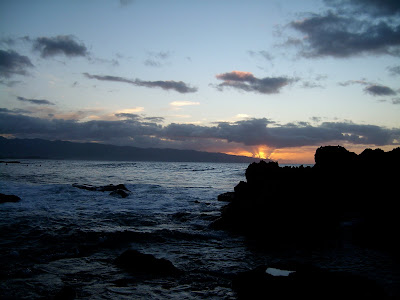 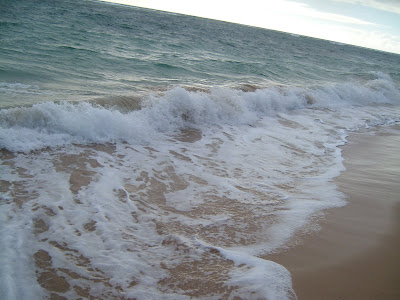 Posted by collette charles at 11:58 PM No comments:

Labels: hawaii i miss you

my love affair with the ocean 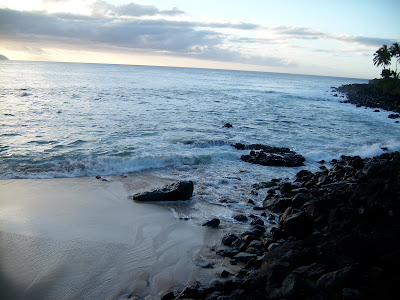 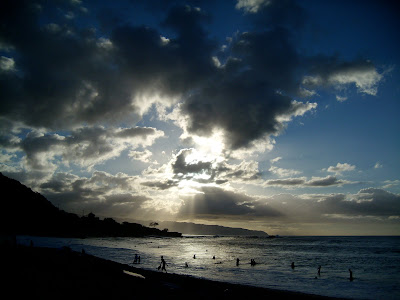 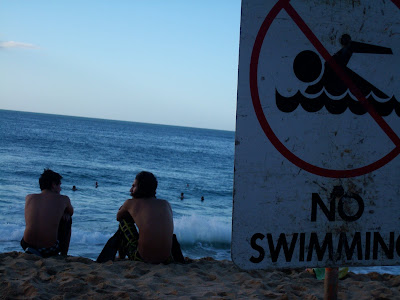 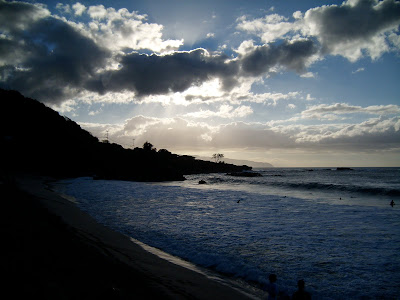 it had been a very long day of traveling. flying, waiting, driving, waiting, and then the van full of strangers dropped me off in the driveway of a white duplex surrounded by jungle, accompanied by two suitcases, a longboard, and my guitar. my phone had died hours before. i was almost three thousand miles away from any person i knew by name.

after finding my way to the door, claiming my bed, and leaving my belongings in this new humid place with the sounds of chickens, cars blaring on the highway, and brown people playing reggae, i set off to find a beach.

i didn't have to go far. across the street was a beach park. the spongy grass felt strange on my bare feet and the trees dropped prickly things that stuck to my toes. a small incline led to the beach and the thickness of jungle and palm trees opened up to a sea of blue green grey waves. in disbelief i slowly neared the edge of sand and looked out to the ends of the earth. sobs escaped from my throat. i was home. and so began my love affair with the ocean.

it is difficult to describe the comfort of living so near to the ocean to someone who has only visited or seen pictures. i don't know if every person who lives near an ocean feels the same sense of love and security as i did, but the ocean became so much more to me than a place to swim, socialize, or admire. i took all my problems, insecurities, doubts, as well as my joys and dreams, to the ocean.

i learned a healthy respect for the ocean as well. there were a few times i honestly thought i was going to drown and die. i learned when to get in and swim, and when to just sit on the shore and watch. there is a certain trust one must have when entering those waves. i watched men surf in thirty foot waves. i saw beautiful brown babies learn to float in calm waters. bad weather and flooding caused the ocean to become brown and muddy, full of debris; still she was beautiful.

there were things from the past haunting me, halting my growth and progression. i took these things to the ocean. usually just in thoughts, but some nights i screamed and beat my fists. i wrote letters to the people who had hurt me, penned them with the sea air in my face and the smell of salt on my lips. i saw many a full moon's reflection over the dark waves and watched sirius make his way through the night sky. the ocean was always there, always listening.

the ocean heard thoughtful discussions with close friends, held us in her arms, and heard us sing. friendships grew, love grew, and we grew.

the day i left hawaii, i spent the entire afternoon at the beach, saying goodbye. it was heartwrenching, and i know this sounds so dramatic, but i truly felt i was leaving my best friend behind.

now im landlocked and far away from the humidity, hot sand, and loud reggae. im engaged to a wonderful man, and i have a happy life here. but the day after tomorrow im getting on a plane and flying back for two weeks. this may sound ridiculous, but i don't think i could get married and commit my whole life without talking to the ocean about it first. i am committed and im ready, but i need to feel that piece of myself i only ever felt there. i have to feel that piece and take it with me so i can be complete and whole.

"Heart, that sinks through fading colors deep
To the subaqueous stillness of the sea,
And floats forever in a moon-green pool,
Held in the arms of rhythm and of sleep."

(i am in need of music, elizabeth bishop)
Posted by collette charles at 11:10 PM 2 comments:

Labels: hawaii i miss you
check out the bluegrass band playing at our wedding

they play at a bbq place every friday so we went to watch and pick apart some ribs. mmmmmhmmm

besides their fantastic music and 17 years worth of practice together, they have a comedy routine :)

and each musician totally looks like their instrument.
Posted by collette charles at 7:31 PM No comments:

so i've been really stressed lately because i don't have a job. i feel like i have to get up early, work out harder than i normally would, be productive, and basically make up for the fact that i don't have a job and am "useless." grumpy, self absorbed, irritated, and pessimistic are some of the emotions i have been projecting onto the people i love.

what should be happening is i should take advantage of all this time to do the things i love: music, painting, reading, being outdoors, enjoying my family and travis. i should be using this time to enjoy planning our wedding. i may never have this much free time again in my life, so no more wasting.

im done stressing out over three months of unemployment/school being out for summer. the weather is finally gorgeous, im getting married to a wonderful man, going to hawaii for two weeks, im young, life is good.

no more stress
no more pessimism
no more grumpy
Posted by collette charles at 10:27 PM 2 comments:

the sexy man who fixes sprinklers 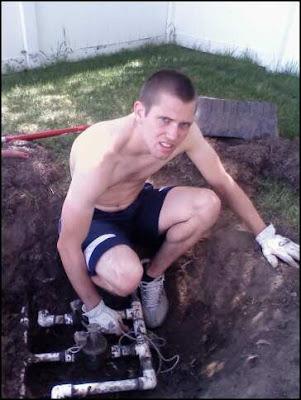 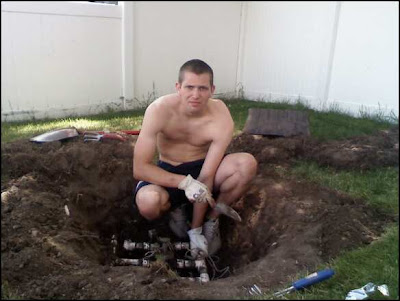 he might be upset that i posted these...
Posted by collette charles at 9:58 PM No comments: